The 19th Century Photographic Record of the Thylacine

Photography was invented in the early 19th century (c.1826), but by the turn of the next century it was still uncommon. It is thus no surprise that the 19th century photographic record of the thylacine is meagre at best. There are eight known, surviving photos of thylacines or their remains: one living animal, one dead, three taxidermied, two skins, and one fur cap. While one further photo may still survive, and one hypothetical photo may have been taken.

Each photo is discussed, followed by a tentative list of publications that have subsequently reproduced the image. Doubtless this list will grow larger in the future as my research progresses.

The Hobart Town Daily Mercury for 20 May 1858 carried the following piece:

"A NATIVE TIGER -The body of one of these nearly obsolete animals was forwarded on Monday to the Royal Society by Mr. C. S. Henty, M .H . A., having been shot by a settler at the westward. The animal is like almost all others in Tasmania, marsupial, having the pouch or purso so well known in the kangaroo and opossum species. It has a very formidable appearance, the month like that of the "devil," being large, and furnished with long and very strong teeth, as white as ívory, and the jaws extending far into the skull. The tiger is marked very beautifully on the sides and tail with yellow stripes on a mouse-coloured ground, and is about two feet and a half in height, and rather more than three feet in length. The animal has been forwarded to Mrs. Touch, of Brisbane-street, for the purpose of being properly prepared for a place in the Museum, and, in the mean time, Mr. Frith, the photographic artist, is engaged on a portrait, which will be ready for exhibition to-day." (p. 3)

This story was reprinted several times over the next two weeks without updating the status of the photo (Anonymous, 1858b,c,d). Thus it may never have actually been taken. Although it seems quite likely that it was, as it would take a significant change of plans or a problem to arise for it not to have been. Contingencies for which we have no evidence.

I contacted his grandson, Noel Tozer, on 30 April 2019 and was informed by him that I was the second person to contact him because of the newspaper article. The first was a lady from eastern Australia (possibly Sydney) who had contacted him 5 years previously about the possible existence of the photo. As a result of her enquiry, he searched several of Tasmania's archives for the hypothetical photo as part of the research for his book "Snips & Snaps" but was unsuccessful (Tozer, 2018:124). He then agreed to make a second attempt to track down the photo for me, but as I never heard back from him I assume nothing was found. 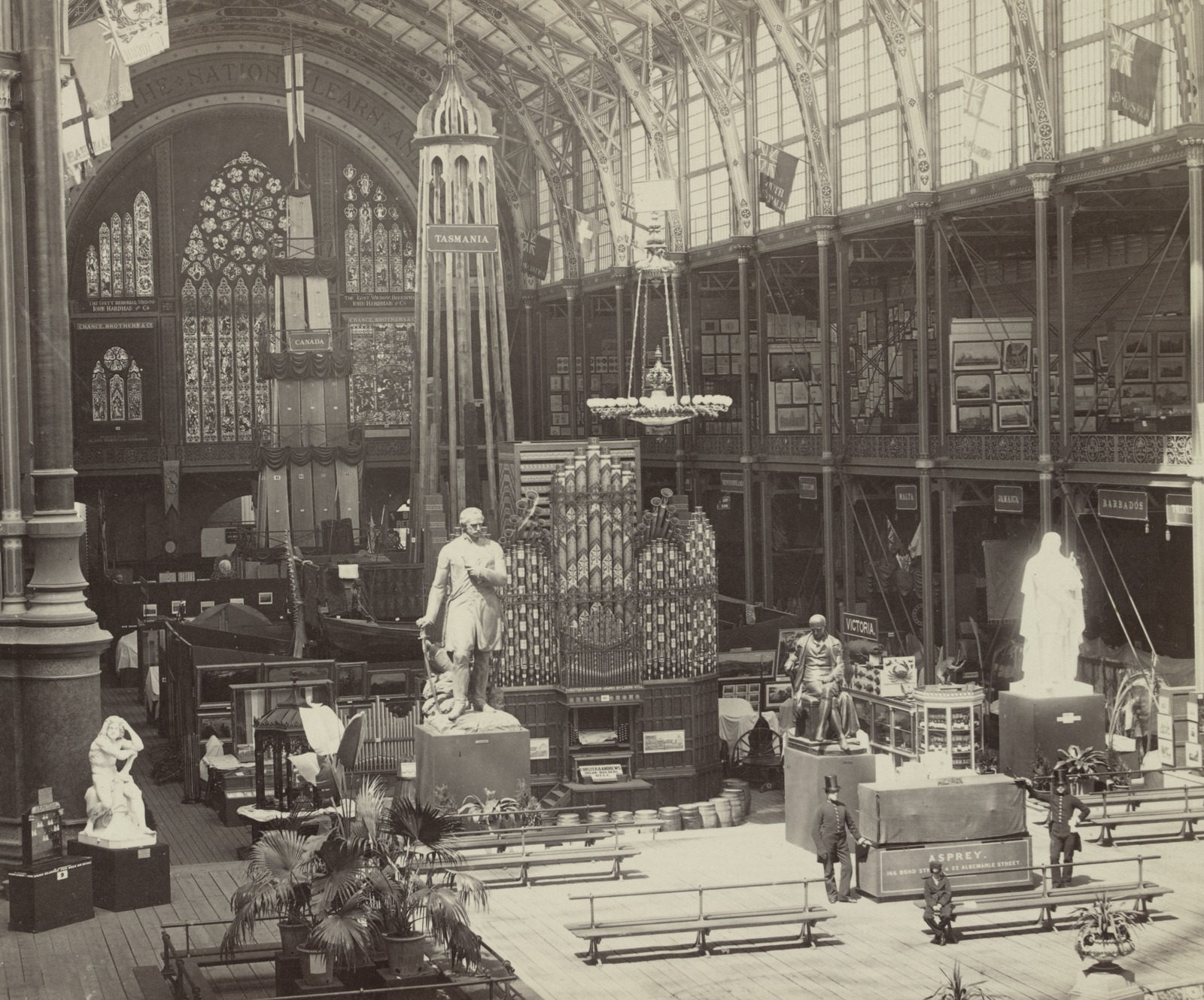 A close up of the relevant portion of the photo (slightly to the right of the upright whale jawbone): 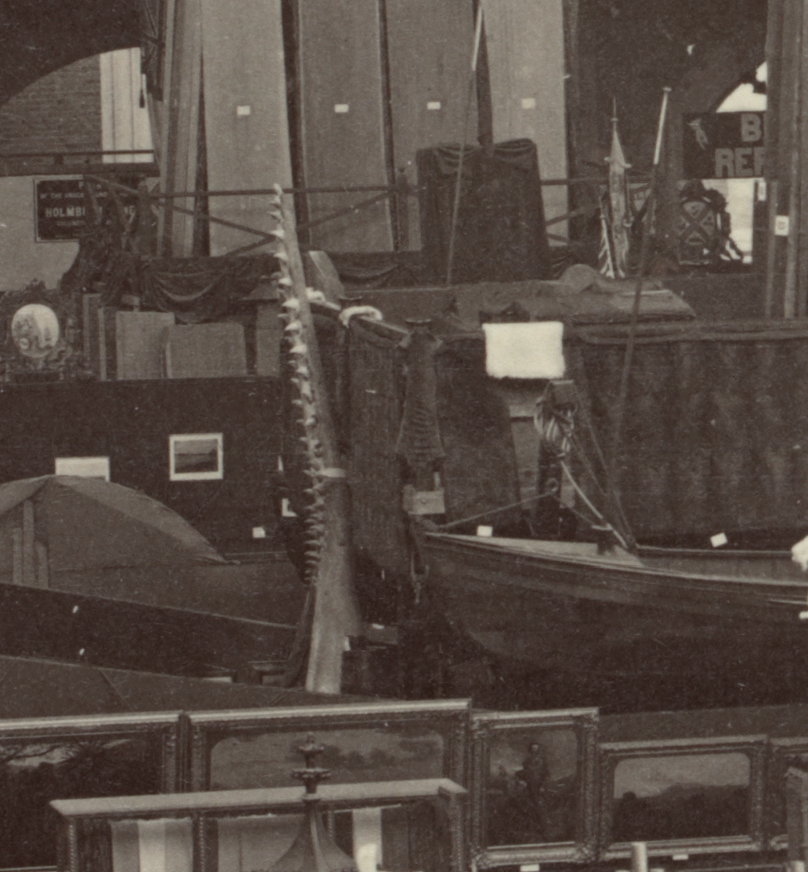 Prior to the discovery of (the significance of) this photo in early September 2020 (and the subsequent finding of No. 3 as a result of the lead provided by this photo) the earliest known photo of a thylacine, alive or dead, was the Frank Haes photo at London Zoo from 1864 (see No. 4 below). What is most remarkable about this discovery is that the skin is not visible unless you zoom in considerably when the only indication that the photo may be of interest is the "Tasmania" sign, which makes its discovery by the eagle-eyed Dianna Scott truly incredible.

An earlier newspaper article (Anonymous, 1861) describes the contents of the Tasmanian portion of the exhibition, which also included a taxidermied specimen and so it is posisble that this latter specimen was also photographed. However, I have not been able to find any photo that depicts it yet.

The photo is housed in the La Trobe Picture Collection, State Library of Victoria (Sweet, 1997)

Front view of the stereograph: 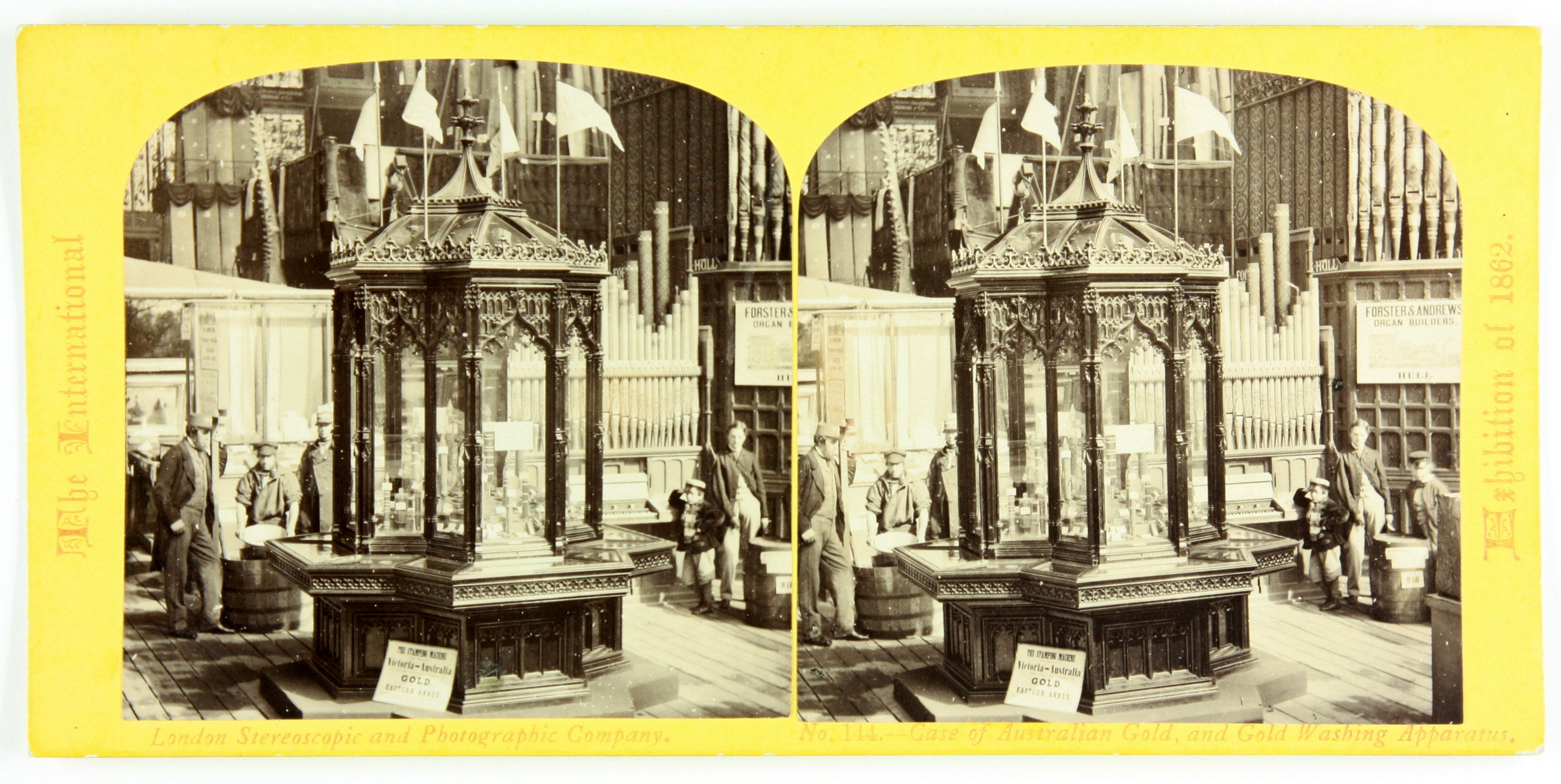 Rear view of the stereograph:

This photo was discovered by Michael Ryan in early September 2020, after Dianna Scott's discovery of photo No. 2 above lead him to search for further possible photos showing the skin.

The photographer is unknown.

This is the only known photo to survive that depicts a living thylacine from before the 20th century. It might thus be assumed to be a much happier affair than the rest of the photos of dead specimens. However, the circumstances of the photo make this false. The animal was chased around its small enclosure until it collapsed, exhausted in its water trough.

The Australian catalogue for the Melbourne Intercolonial Exhibition (Anonymous, 1867), under "Products of New South Wales", has the following entry:

It is rather natural to suppose that this photograph may be the hypothetical Frederick Frith photo almost a decade after it was taken. After all it is simpler to posit one photo rather than two. However, the photo is listed under New South Wales and not Tasmania, with the former having already ceased to administer the latter

The photo is not known to survive, but as a photo of a skeleton it's identity could easily be overlooked. Moreover, given the brief description in the catalogue it is not clear where the photo could be if it does survive. Thus it is difficult even contemplating how one might go about trying to find it after all these years. You might have a better chance actually finding a thylacine.

Reproductions: [None known. Survival of photo not guaranteed] 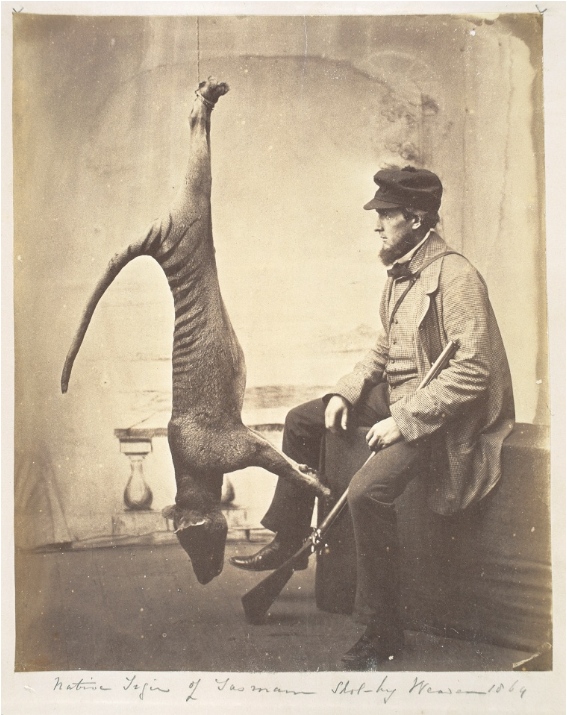 Note the handwriting below the photograph: "native tiger of Tasmania shot by Weaver 1869".

Given the reclusiveness of thylacines, historically described as shy and retiring, it is surprising that the only known 19th century photo of an intact dead specimen was shot rather than trapped or snared. Indeed the last known photo (or rather set of five photos) of a dead specimen was also shot. By farmer Wilf Batty on his family's farm at Mawbanna in the state's north-west, probably on 13 May 1930.

The first reproduction of this image that I am aware of is (Beresford & Bailey, 1981). They give a description of what is depicted: Mr Weaver bags a tiger, 1869 (p. 4). As the handwriting below the photo shows, this is a mere description rather than the actual title on the photo. Yet it appears that some person or persons have misinterpreted this intent, as one now routinely finds the assertion that the photo is (en)titled "Mr(.) Weaver bags a tiger, 1869" (e.g. Owen, 2003,2004; Thylacine Museum, fourth revision [2013], fifth revision [2017]). Although some authors do correctly described the photo (e.g. Maynard & Gordon, 2014)

Curiously, Guiler & Godard (1998:238) lists the Weaver photo in the "Illustration Credits" but the photo does not actually appear in the claimed place in the book (viz. page 98). However, they attribute the photo to Voctor (sic) A. Prout. The Thylacine Museum, fifth revision (2017) is more tentative, noting that it "was possibly taken by Victor Albert Prout".

According to (Maynard & Gordon, 2014:22) the original photo was presented by Lady Dry to the Royal Society of Tasmania in 1906, and now resides at the Tasmanian Museum and Art Gallery (TMAG). 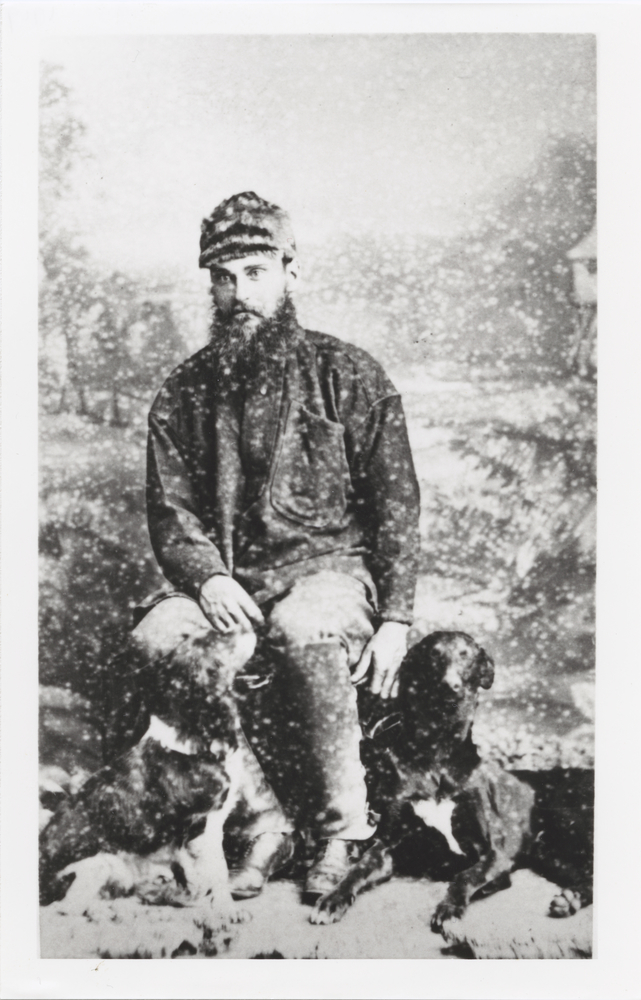 "Climed [sic] up a hill along the track
With Spero & Spiro my two dogs.
But soon the dogs a scent had found
Rushed on in front the game to find With noses pointing to the ground
Left me some forty yards behind
When lo! I heard a savage sound
Among the ferns hard by
As some ebast upon the ground
Yelled out its last its dying cry ...
In haste upon some mossy logs
My heavy load was flung
And quickly to the barking dogs
...[from?] stones and logs I sprung
Upon the turf there lay quite dead
A beast with stripes upon his coat
Young Spero bit about its head
While Spiro grasped it by the throat
So [?] there a noble tigre [sic?] died
Just as the sun set golden rays [?]
Shed light upon the mountain [?] side
And victors of that savage fray"

Unknown to the present author.

Unknown to the present author, but as it seems to have first been reproduced in 1980 (viz. Binks, 1980) it presumably still survives. 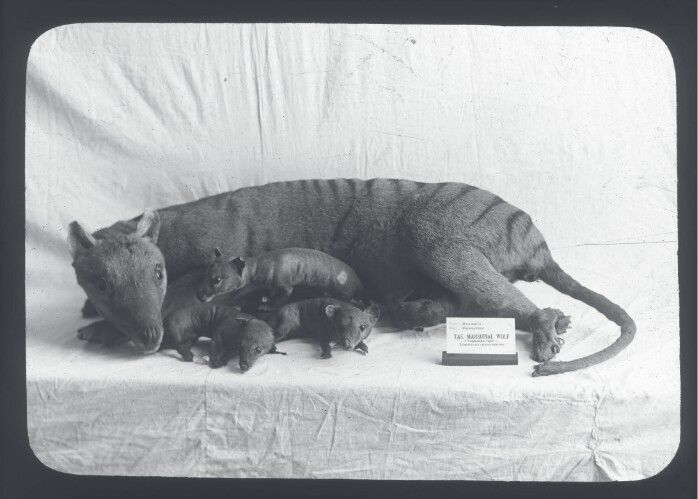 This photo is one of two known (the other is directly below) that depicts the only known taxidermy of a mother and her pups/joeys (n=4). The specimens were donated by William Turvey, then treasurer of the Buckland and Spring Bay Tiger & Eagle Extermination Association (Paddle, 2000:142; Maynard & Gordon, 2014:112).

The dating of this photo is tentative, and based upon the seemingly fresher state of preservation of the mother, as contrasted with photo 7 below. In particular, she appears to exhibit a large crease at the upper most part of the rear left leg in the later photo (below) which is absent from this photo. Although caution must be eased as it is possible to discern a disturbance of the same basic shape to the same area of the animal in the above photo.

The specimen was donated by William Turvey, treasurer of the Buckland and Spring Bay Tiger & Eagle Extermination Association (Cooper-Maitland, c.1968; but see Paddle, 2000:141)

Taken by a member of the Pretyman family (source).

Held by the State Library of Tasmania, accessioned as NS1013/1/1243 and available online.

This photo is the second of two known (from the 19th century) that depicts the only known taxidermy of a mother and her pups/joeys (n=4). The specimens were donated by William Turvey, then treasurer of the Buckland and Spring Bay Tiger & Eagle Extermination Association (Paddle, 2000:142; Maynard & Gordon, 2014:112). Turvey had previously donated a large male (Cooper-Maitland, c.1968; but see Paddle, 2000:141), which may be that situated standing behind her. The female and her pups/joeys appear to have been destroyed around 1935 ([Cooper-Maitland, c.1968?;] Maynard & Gordon, 2014:112).

[Unknown to the present author, probably a public archive in Tasmania]

Conclusion: Are there other photos?

To jump forward to the 20th century, there are a number of photos of the thylacine that have still never been published, as well as some that remain under copyright. And several more have come to light in the last few decades. Thus it is perfectly possible that somebody out there knows of more photos from the 19th century than I do. Alternatively, there may be undated photos which further research may uncover are from the 19th century. Particularly as, rather than increasing as photography became more common, known and hypothetical 19th century thylacine photos cluster from the late 1850's to the end of the 1860's, with the remainder spread out rather evenly. Except for a notable absence during the 1870's, from which no photo, actual or hypothetical, is known to the present author.

Anonymous. (1867). Intercolonial Exhibition of Australasia, Melbourne, 1866-67: Official Record, containing Introduction, Catalogues, Reports and Awards of the Jurors, and Essays and Statistics on the Social and Economic Resources of the Australasian Colonies. Melbourne: Blundell & Co.

I thank Gareth Linnard for pointing out the superior quality of the Weaver photo contained in Nick Mooney's Capeia article. I also thank Neil Gill for pointing out the 19th century date of the photo of the taxidermied family associated with the Buckland and Spring Bay Tiger & Eagle Extermination Association (No. 10).